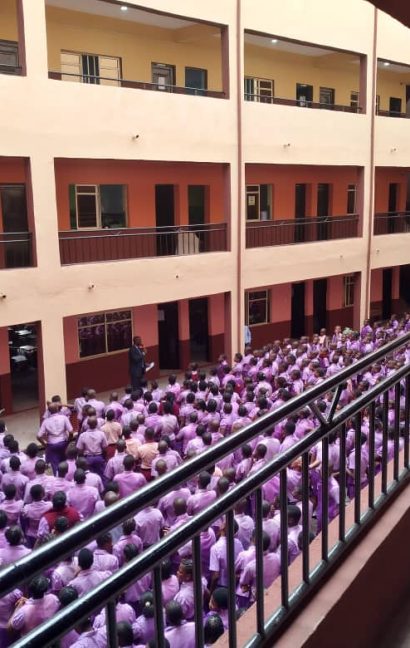 What is now called Ferscoat International School started as Ferscoat Nursery and Primary School, in September 1992, with 12 pupils and 3 teaching-staff. The school metamorphosed from a coaching centre into Ferscoat Nursery and Primary School. Within a short time, the school became a household name because of the dedication and hard work of the staff and pupils of the school. At the end of the 1993/94 academic year, the pupils’ population stood at 48.
In October 1993, the proprietor (Pastor Felix E. Opata) joined the school fully as the headmaster and Director of studies. By January 1995, the school recorded an astronomical increase with a pupil population of 350 and staff strength of 15.
The approach of the school towards transforming pupils to excel was so sustained that it earned the school the accolade “Panel beaters” and “Extra milers”.
By the beginning of the 1995/96 academic year, the pupils’ population had risen to 400 with a staff strength of 20. In June 1995, the school was approved by the Lagos State Ministry of Education. Despite the prevailing trend in examination fraud which makes pupils reluctant to learn, the school succeeded in instilling in pupils the need to work hard and be prepared adequately in order to be confident when sitting for external examinations.

Mission anchored on the fear of God to raise learners who are systematically trained to be independent, to face both academic and other challenges of life in order to meet the needs of the ever changing society.

What type of curriculum do you run?

We implement the Nigerian curriculum. Some contents outside it are also taught to our students in other to meet their needs.

Our results have been very good. 95% of our students have met the requirement for admission into any tertiary institution after graduation.

Do you have a boarding facility?

Yes, our boarding system accommodates learners from 6 years and above.

Our school fees are very affordable. And is subject to review depending on the class of the learner. Boarding students are required to pay additional fees.

Our philosophy makes us distinct. We have zero tolerance for examination malpractice
130
Staff Strength
967
Learners
3
Locations
30
Years in the Business